The statue represents Bielsko-Biala’s Cartoon Film Studio’s popular animated hero Pampalini the Animal Hunter accompanied by one of the exotic animals he was hunting. Pampalini and Hippo are located in the city centre, in the vicinity of the City Hall, at Bohaterów Warszawy Street. The sculpture was created in 2019 by a renowned sculptor from Bielsko-Biała Lidia Sztwiertnia. The sculpture is approx. 150 cm high. The series “Pampalini the Hunter” created in the 70’s of 20th century consists of short stories dedicated to the hunting efforts of brave Pampalini who embarks on, obviously bloodless, yet successful hunting sprees to track down wild animals. 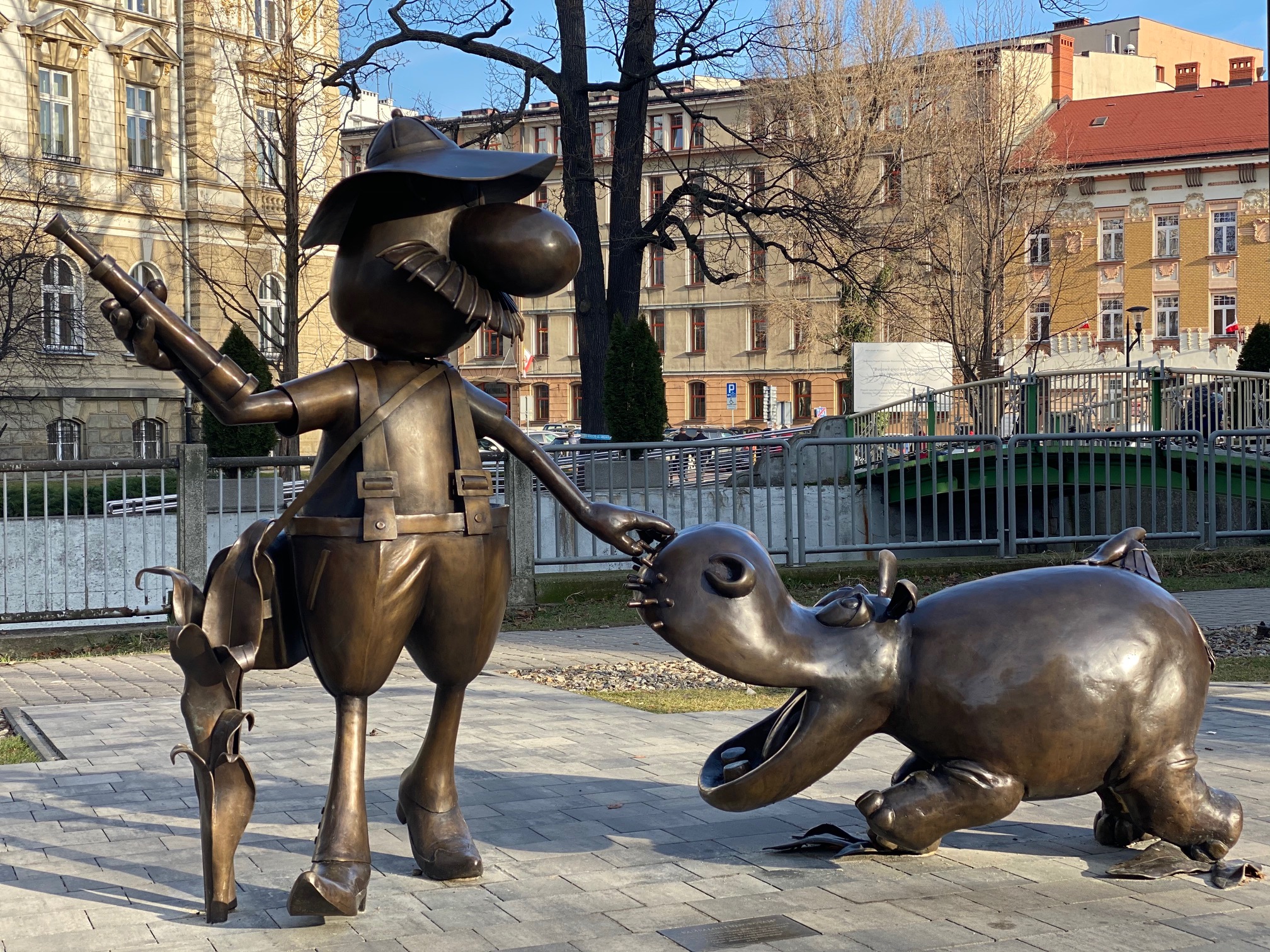 Grodzisko, located in the area round the streets called Pod Grodziskiem and Wał Szwedzki in Old Bielsko, is all that is left of a fortified medieval farming settlement. Most probably established in the 12th century, it is the earliest evidence of organised settlement within the city area.

The Castle, built in the 14th century by the Cieszyn Piast dynasty, was rebuilt and restyled many times over the centuries by successive owners. Modernisation works undertaken by Duke Ludwik Sułkowski in the mid-19th century ultimately effaced the former stylistic building features, replacing them with a contemporary and eclectic look. Today the Historical Museum in Bielsko-Biała has its main base here and amongst its exhibitions features displays on the archaeology and history of Bielsko, Biała and surrounding areas, and the folk culture of Bielsko and Biała. There is also the Knight’s Room, also called Lapidarium, and Gallery of Modern Bielsko-Biała Regional Art. The interiors are worthy of note too, and these include the Music Room, a mid-19th century Drawing Room of the new Middle Class, and also a Lady’s Boudoir and Gentleman’s Study.

The centre of medieval Bielsko, follows the classical layout of a town in accordance with Magdeburg law. Originally wooden-built, it succumbed to fire, as a consequence of which stone townhouses were constructed. Today 17th and 18th century townhouses stand here. Along one of the narrow-cobbled streets branching out from the square and underneath one of the terraces is an arcade which lends itself to being one of the most charming parts of the city.

Close to the historic arcades of Podcienie St. and very near to the Castle itself, one can marvel at one of the most beautiful buildings in the city, the Baroque townhouse Kałuża on Wzgórze St. In the past the Old Town was enclosed by fortified walls, remains of some of which can be seen on Orkana St.

The Weaver’s House at 51 Jana III Sobieskiego St. is a standalone extension of the Museum. It features the living quarters and workshop of a Bielsko clothier, as well as an ethnographic display of folk costumes from the Silesian and Lesser Poland borderlands.

The Old Factory is another annexe of the Museum. Located at Żwirki i Wigury Sq., it contains a unique collection of historic textile machinery. A permanent historical exhibition reminds us of Bielsko-Biala’s rich industrial heritage.

The statue represents Bielsko-Biala’s Cartoon Film Studio’s popular animated hero and is located in the city centre, on the square by the Biała bridge between 11 Listopada and Stanisława Stojałowskiego Streets.

The statues represent the famous cartoon brothers, and have stood since 2011 on the forecourt of Mostowa St, in front of Sfera II Shopping Centre in the city centre.

The statue will represent Bielsko-Biala’s Cartoon Film Studio’s popular animated hero Pampalini with a hippo and will be located in near  the City Hall on Bohaterów Warszawy Street. It is currently being built.

Bielsko-Biała Main railway station building (Bielsko-Biała Główna) was constructed in 1890 and has been beautifully restored, showing off the attractive Pompeiian-style polychromes in the main ticket hall. In 1855 Bielsko was connected to the Emperor Ferdinand Northern Line, running from Vienna to Lwów (Lviv).

Situated on 3 Maja St, with its Neo-Renaissance façade, was formally the glamorous Cesarski (Imperial) Hotel.

The Polish Theatre building (1890) at No. 1, 1 Maja St. was built in a Palladian Neo-Classical Historicist style with statues of Apollo and the Muses Melpomene and Thalia displayed on its façade. It has a beautifully restored and richly decorated interior. Dancing nymphs are depicted on the historic curtain. In front of the theatre there is a fountain originally constructed in 1895. The modern Mała Scena (Small Stage) is in the former paint room at the rear of the building.

The Main Post Office at No. 2, 1 Maja St. has a distinctive cupola and the figures of Jupiter with an eagle and Mercury with a staff.

City Hall on Ratuszowy Sq. is a grand Neo-Renaissance building, at one time the headquarters of the Communal Savings Bank, municipal council and city council. It now houses the offices of the city authorities.

It is an impressive building formerly known as the Hotel “Pod Czarnym Orłem” (Black Eagle). Instead of hotel rooms the building now comprises offices and an exclusive arcade of shops.

Situated at nos. 12 and 13 Wojska Polskiego Sq. The first of these has decorative features imitating a ‘Prussian’ (timber-framed) wall, a mini-tower, kidney-shaped windows and bay windows above the entrances. At one time Rudolf Nahowski’s winery was located within this building, hence the two amusing, carousing frogs above the portal entrance (on Targowa St.). The second townhouse building has decorations representing treetops on its façade.

It is a gothic church with prized polychromes and was built in the second half of the 14th century as a place of worship for the city of Bielsko.

Situated on Św. Mikołaja Sq. is a 15th century church built in the Gothic style, remodelled for the final time at the beginning of the 20th century. At that time the church acquired a widened nave, a Neo-Romantic façade and tall tower topped with several tiers of recessed balconies.

Situtaed on Jana II Sobieskiego St. was constructed at the beginning of the 17th century in late Gothic style as the first of the new Protestant churches. It was taken over by the Catholics during the Counter Reformation. Post-rebuilding, this place of worship has an eclectic character.

Church of the divine providence in Biała

It is a Baroque-style church possessing valuable works of art from the second half of the 18th century, including a pulpit in the shape of a fisherman’s boat sailing under the sign of the cross with Jonah in the mouth of the whale.

It is a charming wooden church, with interesting polychromes, built at the end of the 17th century.

Bielsko Zion is a district within the city belonging to the evangelical parish. Here on Marcina Lutra Sq. we see the Church of Christ the Redeemer, a presbytery, the Augustan publishing house and two school buildings. The headquarters of the Bishop of the Cieszyn Evangelical-Augsburg diocese is also here.

A bronze statue of Martin Luther stands on the square named after him, the only statue of this theologian and religious reformer to be found in Poland.

The Church of Christ the Redeemer

It is situated on Marcina Lutra Sq. is in the Neo-Gothic style. It houses a fine 19th century organ.

The Church of John the Baptist

It is a 19th century place of worship with numerous windows over three floors.

The Church of Martin Luther

It was constructed in the late 18th century, contains a valued organ crafted in the renowned workshop of Karol Kuttler in Opava.

Of the Jewish cemeteries the one in Biała was taken apart in the 1960s on the orders of the authorities of that time. However, the other Jewish cemetery on ul. Cieszynska remains intact. The Pre-Funeral House was also saved. Its walls are decorated with historic polychromes.

An exhibition of works by Władyslaw Reymont, hand-written and illustrated by Tadeusz Modrzewski.

Antoni Przychodzeń opened the Fiat 126p Museum in the rooms of a disused factory on Karpacka St. Included in the collection is the green ‘maluch-kabriolet’ (‘tiny tot’ cabriolet), the diesel-fuelled ‘maluch’, the ‘maluch’ on caterpillar tracks and many more.

The Banialuka puppet theatre is one of the best-known puppet theatres in Poland, often invited to the most important festivals. It has won numerous awards. Included in the theatre’s rich repertoire are productions for children, teenagers and adults, characterised by its own specific staging élan and ever relevant topical themes.

Tourist recreational centre on the slopes of mount Dębowiec

Attractions of the center: four-seater chair lift, travelling 600m; at the lower level: a rope park, team sports pitch and outdoor gym; at the higher level: an enclosed children’s playground and climbing wall, the Mount Dębowiec tavern and an educational trail with information boards and a water feature for reptiles.

Enduro Trails Bielsko-Biała is a series of mountain trails for bikes. It is a network of one-way tracks, known as ‘single tracks’, designed for bikes, and are the favourites of mountain bikers: narrow, twisting and undulating paths of various degrees of difficulty, from easy, gently-descending inclines to steep and technically demanding rides down. In winter it welcomes the skiers.

Six minutes’ journey time, 1810m long. The cable car run caters for disabled persons in wheelchairs as well as for pushchairs, bikes, skis and other baggage.

Located next to the upper cable car station, the viewing platform is 18m high with 120 steps to the top. There is a telescope with 25x magnification. One can admire breath-taking views of the surrounding mountains.

The bathing area comprises a sports pool for swimming, and a recreational pool with many attractive water features: rapids, climbing frame, geysers, sprinklers, hydro-massage, winding slide, cascading slide, waterfalls, and a paddling pool for children with playground. The water in the recreational and paddling pools is heated. Around the pools there are grassy areas and decking for sunbathing. In the recreational sports area there are two floodlit tennis courts, two beachball pitches, a streetball court and a climbing wall.

The Animated Film Studio invites children of all ages to visit as part of their media education. The programme is adapted to the educational level of each group. Schoolchildren will learn about the successive stages involved in creating animated film, discover more about animation, screenplay, script, special effects and sound effects. During their visit to the Studio they will see real props, decorations and character design techniques. Every visit ends with an SFR production film show in the Studio’s cinema.

On December 3, 2020, in Bielsko-Biała, a sculpture of a character from Stanisław Pagaczewski's novel “The Abduction of Balthazar Sponge" and a cartoon series of the same title, shot at the Bielsko-Biala’s Cartoon Film Studio, was unveiled. The sculpture representing the Wawel Dragon and Chef Bartolini Bartłomiej of the Zielona Pietruszka coat of arms is located on the sidewalk at 11 Listopada Street.  The composition also includes a car with a turning steering wheel. The new sculpture enriched the walking trail of cartoon characters that has been created in Bielsko-Biała. The creator of the visual images of the characters is Alfreda Ledwig. The bronze sculpture was created by the renowned sculptor Lidia Sztwiertnia. 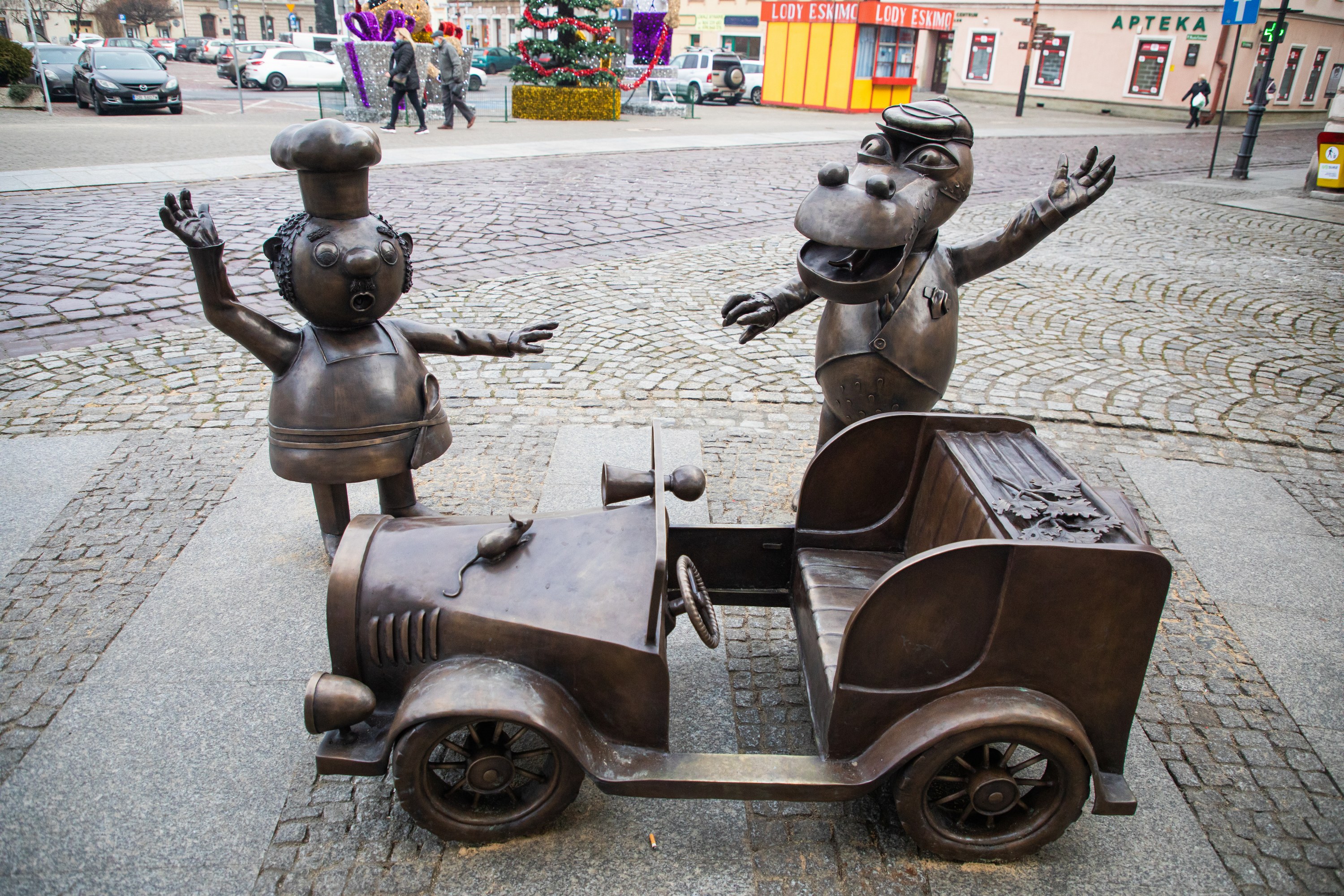